An old ranch hand saddles up, one last time

An old ranch hand saddles up, one last time 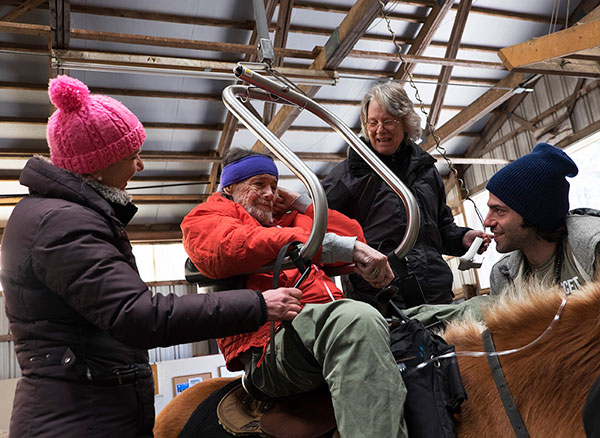 NORTH ANDOVER — Even as cancer ravaged his body, Robert Key simply wanted to get back on a horse one last time.

Key, known to family and friends as "Rebel," was a military veteran who had been diagnosed with lung cancer and given just months to live by doctors.

In his youth, Key worked on a ranch and rode horses constantly, but he had not done so in many years. When he received his devastating diagnosis last year, he had one final dream: to get back in the saddle and ride one more horse, one last time.

Key, 70, died March 2, but not before he was granted his last wish just days earlier, thanks to several organizations, including Windrush Farm, located at 479 Lacy St.

A nonprofit organization which has operated since 1964, Windrush Farm has provided equine activities for disabled children and adults. According to its website, more than 2,000 guests enjoy the educational and therapeutic activities offered by Windrush each year.

In the fall of 2015, when Key expressed his desire to ride again, his nurses at Good Shepherd Community Care in Newton, Massachusetts, a hospice and palliative care center, reached out to the Dream Foundation for help.

A national nonprofit that has granted the wishes of terminally ill adults and their families since 1994, the Dream Foundation contacted Windrush last November. In addition to its disabled guests, Windrush has provided the same educational and therapeutic activities for veterans.

"The Dream Foundation knew of our work with veterans and thought we might be able to help," Windrush Executive Director Mandy Hogan said this week. "Once we heard Rebel's story, we immediately wanted to get him on a horse."

Windrush initially hoped to have Key come for a visit in December 2015, but Key was unable to come to North Andover due to poor health and lack of support, according to Hogan.

But two months later, on Feb. 27, 2016, Key arrived at Windrush with his "dream team" behind him: his social worker, Donna Delone; his nurse and a volunteer with Good Shepherd who was also a military veteran.

According to Hogan, she and her staff assisted Key's team in helping Key, who was confined to a wheelchair and breathing with an oxygen tank, out of the van they had driven in and onto the mounting ramp inside Windrush's indoor horse corral.

Key's companion in the corral was "Squash," a short, sturdy horse of the Haflinger breed. According to Hogan, Squash stood "rock solid" as Key's support team lifted him from his wheelchair and onto the horse's back.

Key's weakened condition made it difficult for him to go on a lengthy ride with Squash, but he was able to sit in the saddle for roughly 10 minutes before he had to go back into the wheelchair, Hogan said.

While Key may not have been able to ride Squash himself, he got much joy from watching Frankie ride instead, according to Hogan. He asked Hogan if Frankie could take his place, and before long, Key was shouting instructions to Frankie as he rode along the corral with help from Windrush staff.

"He was such a generous soul for all he's been through," Hogan said. "He sat (in his wheelchair) on the mounting ramp and told Frankie how to get on the horse, how he should ride him. He rode vicariously through Frankie."

Although they had heard Key's stories about his work with horses over the years, his "dream team" could not believe the enthusiasm the veteran showed at Windrush.

"When they were here, his team was constantly saying, 'We haven't seen him this awake or alive in weeks,'" Hogan said. "It was such a joy for them to see him, in one of his last days, so happy."

Just four days after his "last ride," Key died. Hogan said members of the team found comfort in the fact they were able grant the dream of another veteran.

"My dream would have been for him to be able to have gotten on the horse, and we could have taken him for a real ride," Hogan said. "But we let him call the shots, and that worked out perfectly. It was kind of empo

2022 Top Places to Work in Massachusetts