Hospice, which centers care around each individual’s goals and fears, gives new meaning to end of life.

When Cathy Heller’s mother, Myra, suffered a stroke at 90 years old, “she never really came out of it,” Cathy says. Myra landed in the hospital, then a short-term rehab, and after that a long-term rehab. “My dad was totally confused because he had never experienced anything like that,” she says, “but he went to visit her every single day.” 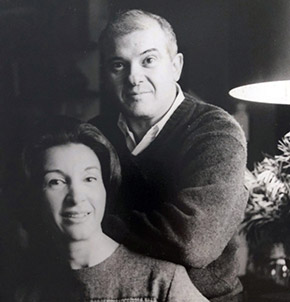 About a year later, Myra had another stroke and her husband, Jack, experienced health setbacks of his own. Married for 72 years, the couple started receiving hospice care from Good Shepherd Community Care, an independent, not-for-profit organization specializing in hospice and palliative care, only six months apart. “It’s exhausting physically and emotionally to have two parents starting to falter at the same time,” Cathy says. “I welcomed any and all support.”

Hospice provides medical, emotional, and spiritual care to improve patients’ quality of life when it’s unlikely that their disease or condition can be cured. In order to be eligible for hospice, two doctors must certify that a patient has six months or less to live.

“The goal of hospice is to make sure that the patient has the best quality of life for as long as they have left,” says Sarah Creed Schmidt, director of nursing at Good Shepherd. What “the best quality of life” looks like, Creed Schmidt notes, is different from person to person. Patients “can be the captain of their own ship, and they can tell us what’s important to them and what their goals are,” she says.

Home care aides from Good Shepherd visit the Hellers daily to check in on the couple’s condition. A dedicated nurse case manager, Lisa Barsanti, oversees Jack and Myra’s care plan and medications. “Lisa feels like a member of the family at this point,” Cathy says. “I see her a couple of times a week, and if I see something I’m concerned about I text her and she’s immediately on it.”

A doctor, social worker, spiritual care provider, and two volunteers—one who does Reiki and one who does soft tissue massage—make up the rest of the Heller’s care team.

“It’s a nice end of life for the two of them,” Cathy says, “and hospice is there every step of the way to help them make sure that they have the richest experience they can.” 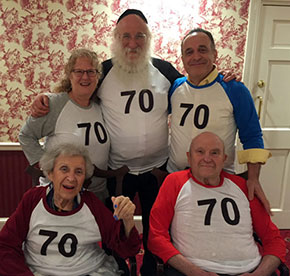 (Photo: Myra, Jack, and their children celebrating their 70th anniversary)

Over the last few decades, a shift has been taking place in the way society sees end of life. “We’re coming to a better understanding and acceptance of end of life issues,” Good Shepherd CEO Tim Boon says. “It’s still hard when we’re told that the time we or a loved one has left is short,” he notes, “but we’re coming to understand it as a time to make the most of.”

Atul Gawande, surgeon and author of “Being Mortal: Medicine and What Matters in the End,” helped to inspire this national conversation. In his New York Times article The Best Possible Day, Gawande writes about seeing the benefit of hospice first-hand. When his daughter’s piano teacher, Peg, faced a terminal diagnosis, Good Shepherd made it possible for her not only to live at home, but resume teaching and even host a few final student concerts in her living room. They put a bed on the first floor, organized a plan for bathing and dressing, and calibrated her pain medications just so, so that she would be comfortable enough to teach but not overly sedated.

“Medicine has forgotten how vital such matters are to people as they approach life’s end,” Gawande writes. “People want to share memories, pass on wisdom and keepsakes, connect with loved ones, and to make some last contributions to the world. These moments are among life’s most important, for both the dying and those left behind.” 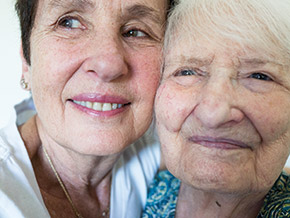 This kind of extraordinary end of life is made possible regularly at Good Shepherd. Care teams have helped patients achieve all kinds of personal goals, like putting together a final art show, writing a book of poetry, and attending a high school prom. But for most people, it’s the simpler things that matter to them most at the end of their lives: They want to be able to go to that big family dinner they used to attend or go to the movie theater, Creed Schmidt says. 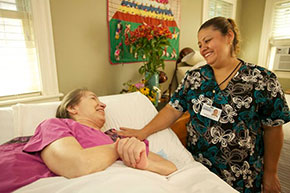 The future of hospice
As the first hospice in Massachusetts, Good Shepherd has a history of influencing national hospice care. Linda Kilburn, one of the organization’s founding directors, was involved in the tax equity and fiscal responsibility act that first made hospice a Medicare benefit. She was also instrumental in developing the National Hospice and Palliative Care Organization, a group dedicated to improving and expanding access to hospice care, and the Massachusetts Hospice Federation.

Good Shepherd has continued that legacy of innovation by adding unique programs to their roster. They implemented the first Russian hospice program in the country about a decade ago. In it, “we care for people in a very culturally competent way with people who speak their language across the whole team,” Creed Schmidt says. Due to popularity, they have since expanded their multicultural offerings to include Chinese and Latino hospice programs.

And because it’s an independent, not-for-profit organization, decisions about operations and finances are made “way closer to the bedside,” Creed Schmidt says. “I think that we’re providing better care as a result of that.” 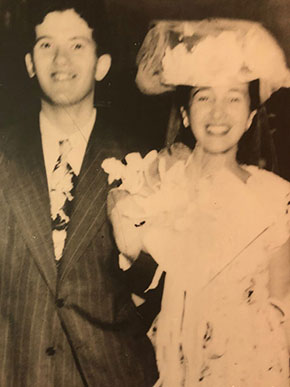 (Photo: Jack and Myra on their wedding day)

During World War II, Jack Heller was in New York City working as an engineer. He had his own wartime duty: His best friends Donald and Richard, who were serving overseas, asked that he occasionally take their girlfriends out on the town.

Jack first invited Donald’s girlfriend, Lanee, to a movie. The next night he took Richard’s girlfriend, Phyllis, to a museum. After those two dates, he had run out of money, so he spent the following evening, this time with the girls’ best friend, Myra, looking at the stars and reciting poetry. Jack and Myra hit it off and a few years later, in 1946, exchanged vows in New York City.

The couple settled in Englewood, New Jersey, a suburb just over the George Washington Bridge, to raise a family. They had one daughter and three sons.

Jack worked as a computer scientist at New York University. He came home for dinner every night and was “very much involved with us kids,” Cathy says. They played a game called ‘which way’ in which Jack and the kids would go for a drive and each one of them would have a turn to say ‘turn right,’ ‘turn left,’ or ‘go straight.’ “We’d end up wherever we’d end up,” Cathy says.

Myra was a stay-at-home mom with a love of fashion, theater, and art. When the kids went to school, Myra and a friend started painting murals for companies in the area and overtime developed a successful interior design business.

The Hellers went on trips to the theater, to the countryside, and a highly anticipated yearly excursion to Atlantic City with extended family. 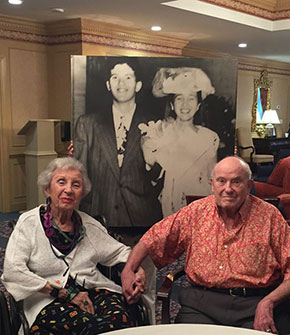 Myra is in bed for 23-and-a-half hours a day and is no longer able to speak coherently. “I think she’s seeing relatives who have passed away because she’s calling out to them,” Cathy says.

For Jack, the changes are subtler. He can’t remember how to get into the computer program he wrote, but he has a group of friends and goes downstairs to the common areas for lunch, dinner, and happy hour.

In preparation for a move to a new long-term care facility, Cathy asked Jack whether he wanted a room, or even a bed, separate from Myra, given the differences in their conditions.

“He said, ‘No, I want to be in the same room with your mother and I want the beds together,’” Cathy says. “My mom can’t answer a question like that anymore, but my dad is clear that he wants to stay with his wife of 72 years, and he wants to be able to hold her hand if she needs it.”

In life’s last moments
Jack, now 96, and Myra, 93, have shared a full life. The couple has made their mark in art and science. They have collected moments gazing at the stars and reciting poetry, enjoying memorable theater, experiencing the mountains, laughing with family in Atlantic City, and playing ‘which way.’ Their four kids, nine grandchildren, 13 great grandchildren (with two more on the way) are products of a lifetime of love. 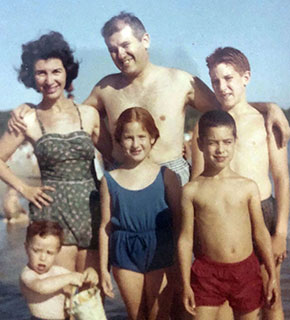 When their time comes, “I hope they die peacefully in their sleep holding hands,” Cathy says. It’s something they have talked about wanting for 30 years.

2022 Top Places to Work in Massachusetts